A True Blast from the Past

Article by: Aurora Prehn and Mark Nesbitt
From: Teajourney.pub

The Royal Botanic Gardens, Kew houses a remarkable cache of tea leaves and tea material culture collected over the past 174 years. Kew, a 326-acre botanical garden southwest of London opened in 1759 and today houses one of most diverse living and dried botanical and mycological collections in the world.

Called the Museum of Vegetable Products for the first four years, the Museum of Economic Botany was intended to display plant based products that could not be seen growing in the gardens or preserved in their herbarium. The museum closed in 1987 when it became one of Kew’s science and conservation collections.

“The project examines for the first time in earnest, the tea and teaware objects held in the Economic Botany Collection, which began in December 2019, and has continued remotely since March 2020,” explains Prehn.

“Our approach is ethnobotanical, addressing a history of tea by utilizing industry knowledge, botanical awareness, and material culture perspectives. Composed of teas made for both domestic and export markets, these artifacts and the rich archives associated with them enable us to cast new light on the intense period of globalization of tea production of the period 1840-1900”, they write.

Rediscovering 174 Years of Tea, Chai, and 茶 at the Royal Botanic Gardens, Kew

There are many histories of tea’s material culture, each depending on the perspective of the historian and, crucially, the raw material and methodology of analysis. This collection is distinct from those of most other museums and archives in being composed primarily of tea leaves, rather than teaware or documents. The majority came from across Asia, between 1847 and 1914, and include all parts of the tea plant, from root to seed, as well as clay, other woods, bamboo, and metals. Alongside processed tea leaves from all six tea categories, the collection also contains: seed husk and flower bud cakes, rare tea types, bricks from remote trading outposts, wooden statues, teapots, adulterated tea, fermented lappet, extracts, and a single yak butter container with an aromatic note left from its contents approximately 172 years ago. As one can imagine, these artifacts contain many biocultural stories, histories, and perspectives.

Kew’s Museum of Economic Botany (that is, useful plants) was founded in 1847 and was on public display until 1987 when it became one of their now eleven science and conservation collections. A distinctive feature of such museums at the time was the combination of botanical raw materials, products made from them, and tools to produce them – both nature and culture on display. At present Kew’s collection contains around 100,000 artifacts, 375 of which (and growing) relate to tea.  These are the primary sources giving unique insight into the dynamic interactions of late 19th century taste, trade, and empire.

We started by analyzing the artifact’s provenance in the collection’s museum registers and catalogue. Our research into the specimens began with the labels, then the non-textual evidence experienced through sight, touch and smell. This method was very telling and a significant step in understanding the collection as a whole, exposing details, similarities, and themes not seen in the written record. Multiple workshops were held in January 2020 for around 50 members of the tea community from the UK and Ireland – a format we hope to continue with different stakeholders.

After the East India Company lost its trade monopoly in China in 1833, British attention shifted to tea production in India, supply prompting the movement of seeds and knowledge from China to India and the formal identification of the Indian assamica variety in 1834. This indigenous tea was long consumed by local peoples. However, two brothers, Robert and Charles Bruce are credited with bringing it to wider attention in 1823 and with their 1838 publication, recounting their first few years of tea production in the upper Brahmaputra River Valley. Their description of a local tea made by stuffing bamboo segments with tea is strikingly reminiscent of the artifact above, from the same area. Arriving at Kew in 1879 it was likely made years if not decades earlier by residents of the region.

Kew’s collection was established only eight years after the first Indian tea leaves were sold at auction in London in 1839. Furthermore, Kew acquired large holdings from the closing of the East India Company’s India Museum in Central London in 1879. Kew now holds many leaves from this very significant chapter in tea’s history. Thanks to a recent donation, we can compare some of today’s orthodox black tea leaves to some from this period, both made in the Kumaon area of Uttarakhand, India. The tea leaves on the left are from the Hawalbagh Plantation No. 4392, which dates to 1879 (likely earlier), while those on the right are from an August 2019 production by Champawat village members led by grower and producer Desmond Birkbeck, whose family has over a century-long history in the area. Both of these teas have their roots in East India Company tea plantings from the mid-late 1800’s, but were produced approximately 140 years apart. An exciting addition to the growing collection, genetic testing might prove their relation spanning centuries.

One well-known collector of tea is the horticulturist and plant hunter, Robert Fortune. His collecting of plants, including tea, in China is well-documented in a recent biography by Alistair Watt. Acting on behalf of the East India Company, he sent a large number of Wardian cases packed with tea seeds, along with tools, artisans and their knowledge from China to India, though he was not the first.

The remarkable history of one of the well respected artisans that Robert Fortune brought over in 1851, John Ajoo, is being uncovered by a living descendant, James Ajoo, based in Chennai, South India. Their family story and the ongoing detective work can be read about in a recent Tea Journey article A Remarkable Quest Reveals Untold Chapter in Tea History.

Because Fortune was not working for Kew, he is not well represented in its collections. An exception is this series of 24 paintings illustrating the cultivation and production of tea by a famous artist from Guangzhou Lamqua (關喬昌 (Kwan Kiu Cheong) 关乔昌 (Guān qiáo chāng)). Kew’s Archives hold a letter from 1850 between Fortune and the Economic Botany Collection’s founder, Sir William Jackson Hooker, discussing purchase of the paintings for around £3.16s.6d (equivalent to $600-750) today.

Collection No. 33725. Three examples from a 24 painting set illustrating the cultivation, and processing of tea leaves into a beverage.

A second item arrived at Kew in 1983 via the Pharmaceutical Society of Great Britain, but is dated to 1852. It was likely collected during his second of five expeditions to China. The label states it is from Yunnan Province, but it is believed to be collected on the coast. Called here “Fancy Tea”, this twisted and bundled tea is eye-catching and clearly related to two other jars. One hails from an apothecary in Central Europe, while the other was collected by G. C. Scorer of Fortnum and Mason in 1872 also from China called “Old men’s eye-brows”. 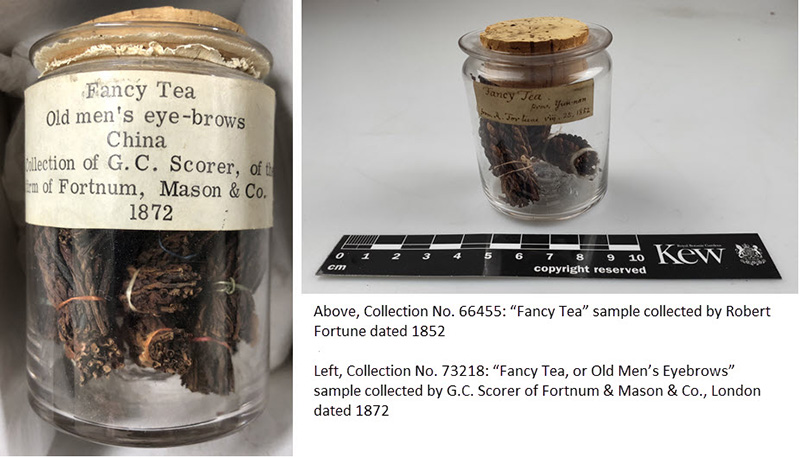 This style of tea is unfamiliar to most in the Western tea industry today. Its origin, evolution, tea type, category, and production status are still all quite elusive. To elucidate the history of this tea, we will need to collaborate with Chinese historians, growing and producing communities, and members industry.  There could be an opportunity to help preserve and possibly revive elements of tea’s biocultural heritage, such as this twisted tea type.

An Invitation to Contribute

Tea is a familiar plant with a history unfamiliar to most. Given its dates and location, the Kew collection unsurprisingly originates in 19th century empire and trade. It tells a story both of tea consumption in Britain, and production (and sometimes consumption) in the 32 countries represented in this collection, chiefly China, India, and Sri Lanka. The collection is deeply connected to the occupation of South Asia by the British Empire, and to Britain’s coercive trade relationship with China, mediated through events such as the Opium Wars. At the same time, these historic teas tell a story of the exercise of skill and agency by producers and traders. Kew’s tea collection thus offers exceptional opportunities for raising awareness of tea’s complex past, and the effects of colonial production both in the past and, of course, on today’s tea economies.

Industry knowledge, in terms of recognizing and characterizing different tea categories, types and their production has been a key part of this project. However, it has become clear that no one person, or body of knowledge, can unlock the stories in this diverse collection. It has been our intent from the beginning, and evermore clear, that it is essential we work with tea experts and historians in source countries and throughout the supply chain.

How Tupac, Too Short and E-40 inspired Oakland’s Hella Tea